Comments Disabled
The 7th points tournament of the season for the #Goodoleboysbassclub was held on Little Sodus Bay. We launched from Fair Haven State Park, which was a very popular launch!! This tournament was a Team Tournament where the top boater in points teamed up with the co-angler with fewest points, the top co-angler teamed with the lowest point boater, and so on until all participants were paired. The teams had the option to stay in the bay or head to Lake Ontario. The winning team of Bill Peck and Wayne Parker stayed in the bay and caught 18.06 pounds of largemouth bass. Second place team of Don Bell and Tommy Merritt brought 17.57 pounds of smallmouth to the scales. Tom Hudson, fishing by himself, stayed in the bay and caught 15.75 pounds of largemouth.
Bass Pro Shops Big Bass-Peck and Parker – 4.25 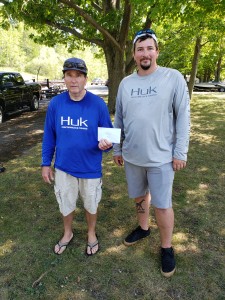 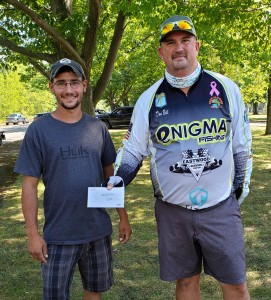